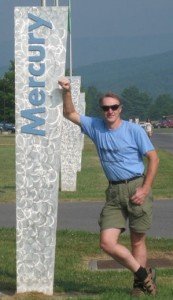 For the World has Hollows, and I have Touched the Ice – The Greatest, Latest MESSENGER Findings on Mercury

Join MESSENGER team member Mark ‘Indy’ Kochte as he takes you on a journey to one of the most elusive bodies in our Solar System, where not even the vaunted Hubble Space Telescope can peer.
On March 18, 2011, space exploration history was made when the MESSENGER spacecraft became the first probe from Earth to go into orbit around Mercury. Since that time, it has taken more than 170,000 images and made millions of spectra observations. From all this more has been learned about our solar system’s innermost world than had been dreamed to ask at the onset of the mission. From newly seen impact basins to the surprising status of the magnetic field, from the make up of the exosphere to the verification of water ice at the poles and to the discovery of geologic features not found on any other body in the solar system, MESSENGER’s discoveries at Mercury have reshaped the theories planetary geologists have had on the origins of the solar system’s littlest planet (as an aside, Pluto is king of a whole separate category of objects).