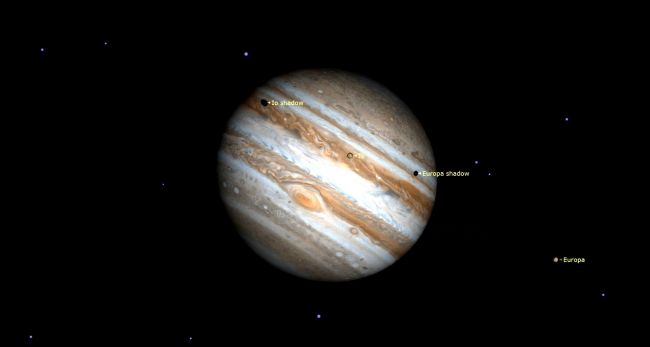 From time to time, the little round, black shadows cast by Jupiter’s four Galilean moons become visible in backyard telescopes as they cross (or transit) the planet’s disk. On Sunday evening, October 13, observers in the Americas can see a rare double-shadow transit on Jupiter. At dusk, Europa’s shadow will be midway across the northern hemisphere of the planet — accompanied by the Great Red Spot. Shortly before 8 p.m. EDT, Io’s shadow will join in the fun. Two shadows will be visible for approximately 35 minutes — until Europa’s shadow moves off the planet at about 8:28 p.m. EDT. Io’s shadow transit will end at 10 p.m. EDT — after the planet has set for more easterly observers.