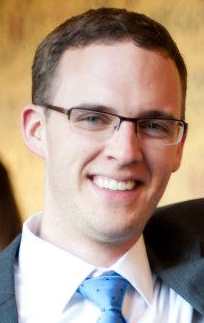 How do stars form?  How can we use radio waves to probe the origins of stars within their cold, dusty natal clouds?  And how do magnetic fields affect the star-formation process?  Come and find out how I use CARMA, a millimeter-wave radio telescope in the Eastern Sierras, to find answers to these questions.  I will begin by discussing the basics of radio astronomy, radio telescopes, and star formation.  I will then talk about the research I’ve been doing on polarization and magnetic fields in forming stars, using the dual-polarization receiver system that I helped install and commission at CARMA.

Chat Hull is a fifth-year graduate student in the UC Berkeley Department of Astronomy.  He hails from Penn Yan, NY, a small town about an hour south of Rochester, in the western part of the state.  In 2006, he graduated from the University of Virginia with a B.S. in physics, shortly after giving his first-ever public lecture to the Charlottesville Astronomical Society in November, 2005!  After graduating he taught for two years in two different high schools: first at Woodberry Forest, an all-male boarding high school (which he attended) about an hour north of Charlottesville, teaching AP and freshman physics; and next at the Centro Comunitario de Educacion Yinhatil Nab’en, a middle and high school in the Mayan highland town of San Mateo Ixtatán, Guatemala, where he taught math, physics, and music.  In 2008 he moved out to Berkeley to begin his graduate studies, and since then has taken great pleasure being a part of UC Berkeley’s vibrant radio astronomy community, where he has learned the ins and outs not only of star formation, but also of radio astronomy theory and instrumentation.