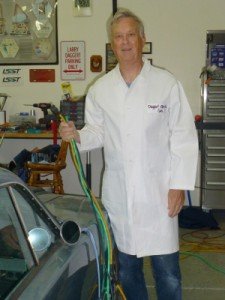 There are three types of glass used in today’s large optical telescope mirrors. Ultra Low Expansion (ULE) produced by Corning Glass in upstate New York, Zerodure produced in Germany by Schott and Borosilicate (E6) produced by O’Hara in Japan and spun cast into solid mirrors by the University of Arizona Mirror Lab in Tucson Arizona. ULE and Zerodure are low expansion glass. E6 is more thermally active but melts at a lower temperature and can be spun cast at a much lower temperature. Each of these types of glass have advantages and disadvantages in producing and polishing. I will explore some of the opportunities and cost associated with producing and using each type mirror in today’s giant telescopes.

Age 70
Education: BSEE Michigan State University, MBA University of Washington Seattle, Master of Nuclear Engineering University of Washington Seattle
Experience: I worked in the nuclear power industry for 20 years. Most of that time was spent at the Westinghouse Hanford Engineering Development Laboratory in Richland, Washington. We designed, constructed and operated the Fast Flux Test Facility (FFTF) a 400 MW sodium cooled breeder reactor. My specialty was nuclear instrumentation and remote handling equipment. The last two years I was in Washington, Westinghouse loaned me to Battelle Northwest Laboratory to work on fusion reactor design. It became clear to me that these were paper studies that wouldn’t be built in my lifetime.

About that time a friend convince me to move to Arizona to work on the Palo Verde nuclear power plants. I was the site manager for the nuclear steam supply system for unit #2. This is an 1,100 MW electrical output plant. The nuclear industry in this country was dying so I began looking for another field that would a allow me to contribute to science and engineering for future generations.

I was hired to Manager the Engineering and Technical Services (ETS) department for the National Optical Astronomy Observatories (NOAO). NOAO is funded by the National Science Foundation (NSF) as part of the congressional budget. NOAO managed Kitt Peak National Observatory, Sac Peak Solar Observatory and Cerro Tololo Inter-American Observatory (CTIO) in Chile. During my 20 years with NOAO we designed and built the WIYN 3.5M telescope at Kitt Peak. The Gemini 8 M telescopes, one on Mouna Kea, Hawaii and one at CTIO in Chile. I also acted as interim project manager for the Advanced Technology Solar Telescope (ATST) during the initial design phase in 1997/1998 and the interim project manager for the Large Synoptic Survey Telescope (LSST) during the conceptual design phase in the early 2000’s. My job was to manage the conceptual design phase and produce a credible design and cost estimate that could be used to secure funding for the projects. Funding for these projects came from Congress, Foreign Partners and Universities. The last project I worked on in collaboration with Caltech is the Thirty Meter Telescope Project (TMT). The TMT is a thirty meter telescope to be sited atop Mauna Kea in Hawaii. This 30 meter primary mirror will be made up of 492 segments that are actively controlled. The collecting are of the TMT will be 144 times that of the Hubble Space Telescope and with diffraction-limited spatial resolution will have a spatial resolution over 10 times better than Hubble. At the time I retired, I estimated the cost of the project at $1.2 billion. The project office estimated the cost at $800 million. I am pleased to see that today the project office is publicizing a cost estimate of $1.4 billion. I still do a little consulting but stay away from any long term commitments.